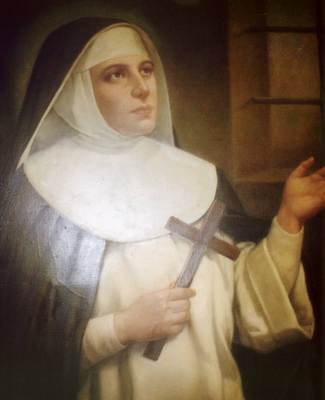 Osanna of Cattaro, a Dominican and virgin, was born on Releza in 1493 and died in Cattaro in April 1565. She was a shepherd and became the servant of God living near the Cathedral of St. Tryphon after her father’s death. It was there, on Good Friday in 1513, that she decided to devote herself to observation of the Passion of the Christ, prayer, penance, and Samaritan deeds.

At first she lived as a penitent woman and two years later she joined the Third Order of St. Dominic, took her religious vows and took the name of Osanna in honour of  the blessed Osanna of Mantua.  Owing to 44 years spent in prayer and penance, she experienced the mystical union with Christ.

As she was a skilled embroiderer, her embroidered corporals are kept in the Cattaro cathedral till this day. She gave her entire income to the poor.

In Cattaro, her hometown, she was known as ‘a teacher of mysticism’ because she especially venerated the Passion of the Christ.  She spent most of her time in prayer and sacrifice for the souls in the Purgatory. She is believed to be an apostle of Christian unity and patron saint of the ecumenical movement by many because of her deeds.

On her deathbed she received the holy sacraments from her confessor, Fr. Thomas Basco and was being read descriptions of the Passion of the Christ from John’s Gospel.

People worshipped her as a saint and Pope Pius XI approved her veneration in Rome in 1927.

Alongside St. Tryphon, Osanna of Cattaro became the patron saint of Cattaro as she saved the city at its worst times of earthquake and plague.