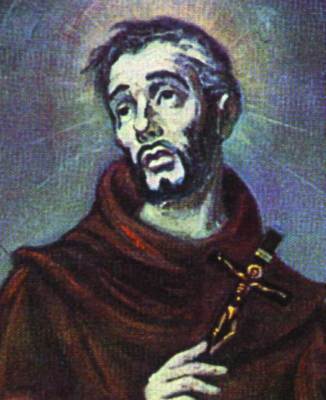 St. Nicholas Tavelić was probably born between 1340 and 1350 in Šibenik. Not much is known about his childhood and youth nor what influenced his young soul to join the Franciscan order.

Just after Nicholas completed his studies, St. Bartul Alvernski (Bartholomew of Alvern), who was the head of the Bosnian Franciscan community asked upon the request of Pope Gregory XI for sixty good and educated monks who would spread the Gospel in Bosnia.

An invitation to the country which was ruled some time ago by Tavelić’s fellow-countrymen and possibly cousins, the powerful Šubić family, had to be interesting to Nikola. He too went to Bosnia.

The inhabitants of Bosnia were predominantly Bogumils. Nikola spent twelve years in Bosnia during which he experienced the joy of conversions and the grief of failure. Hardships were not scarce. Inhospitable climate and difficult terrain were a mere shadow of the ruggedness of life and inaccessibility of the human heart.

Although Bosnia was a missionary country, the Franciscans believed the missions among the dangerous Saracens were more difficult. Of all the pagans, the Rule of the Franciscan Order mentions only the Saracens by name.  St. Francis of Assisi himself headed for the Holy Land to convert them so it should be no surprise if Nikola expected the same opportunity, which then arrived.

Upon his arrival to Jerusalem, Nikola didn’t settle for confession of pilgrims and the few faithful who stayed in Jerusalem. He wanted to draw others closer to Jesus as well. That was why he came to Bosnia, from where he went to Palestine. After extensive consideration and discussion with his brothers on preaching to the Saracens, the dangers of such an undertaking, justification of exposing his life for martyrdom bearing in mind Paul’s words, ‘Woe to me if I do not preach the Gospel’, Nikola  concluded that for him ‘life is Christ and death a victory’.

Accompanied by his faithful Franciscan brother and friend Fr. Deodatus from Ruticini, who shared with him the joys and hardships of life in Bosnia, and two more Franciscan brothers, Nikola boldly took the next step of preaching Christ publicly. They believed they would convert the Saracens if they converted their qadi so they first went to the qadi simply following the example of the founder of the Franciscan order. Just as St. Francis’ word was not heard, their words were not heard either. The only difference was that after his failure St. Francis was allowed to leave in peace and the four Franciscans were sentenced to death, tortured and ended up in dark underground in heavy shackles.

This is how Nicholas got his crown of martyrdom and became an image of his people who would over the centuries that followed become martyrs because of their faith, trampled on, mangled, impaled on a stake, burnt in the fire of their own homes, suffocated in their own blood until all that was left was ‘the remnants of the remnants’, ‘weeping’ ‘dry as stick’, a small and repressed Croatia.