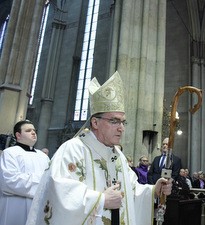 Zagreb Archbishop, Cardinal Josip Bozanić concelebrated the Mass of Easter Vigil with Apostolic Nuncio to the Republic of Croatia msgr. Alessandro D'Ericco, priests of the Zagreb Archdiocese and believers gathered in the Zagreb Cathedral.

At the beginning of his homily, the Cardinal said that this year's celebration of Easter has caught us today, in our earthly transience, in a difficult period for Europe, and that nowadays the history of the Easter period of our continent, as well as many other parts of the world, is being written in the blood of the innocent.

He referred to Pope Francis' words and repeated that as people, as believers, we feel pain for every victim, and together with the entire Church, we persevere in prayer and invocations to the Lord to strengthen sorrowful hearts and to convert the hearts of persons who are blinded by cruel fundamentalism. The evil loves big shows, the Cardinal continued, so it made effort to maintain Jesus' pain and death as an unruly celebration, to feed the public with the blood of the tormented Son of God, to embitter the feelings of souls of the sheep that had been lost until then by humiliating the Good Shepherd. We today will not and do not want to participate in it. So, let us be witnesses to God's actions, the Cardinal underlined, adding that there is a lot of the good among us, to which this Stepinac's Cathedral is a witness, especially in holy sacraments. In this Holy Year of Mercy, many believers, with our youth at the forefront, become participants in God's mercy here via the sacrament of Holy Confession. So, to this date, in its believers, in everyone who believes in the resurrected Christ, the Church is a living witness to God's presence and his victory, sometimes hit and hurt, silenced and criticized, but it still remains - God's witness on earth, the Cardinal said.

He underlined that the Church's entire history is followed by bloody chronology, starting from most apostles, the first witness to the resurrection who ended their lives in suffering, via the first Christians who were brutally persecuted in places of torture and arenas, and those who were killed under totalitarian regimes in the last century, until the present days, when Christians are the most persecuted believers. However, the Cardinal said, the place in which Christians do not shed blood is the place in which the values arising from the Christ's cross are too often crucified. And this is why aggressively, under the motto of freedom of expression, witnesses who do not hide their Christian beliefs in politics, culture or science are publicly exposed. And this is why messages are being sent to families who testify the Christian image of man and woman, father and mother with their children that they are less desirable than some other forms of cohabitation, the so-called new form of family life is being presented to them, and young believers who want to testify their belonging to Christ by gathering in Christian meetings are being presented as backward. They are all witnesses who thwart the plan of the Devil, and this is why they are in somebody's way. The Cardinal also broached the subject of the demographic decrease, which has been present in our society for years, stating that, unfortunately, growing despair and our ever deeper sinking suits someone, and that such distorted reconciliation can only be a result of the Devil's doing. And when conditions for progress are being created, when strength for its realization is being shaped, why does then a fatal slowdown occur, most often in line with the ideological key, the Cardinal asked and warned that there are forces in Croatia which seem to be in charge of and trained only to slow down the progress, since they cannot stop it altogether. Therefore, if they do not know any other way, they present the public with barren discussions from the past, as if the evil in our homeland wants to keep the main role, to have the final say, to feed on the stage lights, the Cardinal said. These examples, he continued, give us an explanation to why Jesus' pain and death, as directed by the evil, had to happen in the racket of the street and the resurrection in the secrecy of the grave. In spite of this, the fact is that the resurrection did happen! The testimony of Easter lives on, and today we live by Easter and of Easter.

Speaking about Blessed Alojzije Stepinac, the Cardinal wondered why Stepinac bothers someone and to whom his figure poses a threat. They want to depict Blessed Alojzije by using methods of the ideology of evil, nazism, fascism and communism, which ruled in the period in which he lived, and with which he was affiliated only as he was forced to act in the period of global and national history, the Cardinal said, underlining that whoever wants to search for the truth should follow in Stepinac's footsteps, they should reconstruct his earthly pilgrimage, even if they have to weigh each voice he uttered or letter he wrote, but if they follow Blessed Alojzije Stepinac, then they can only come to Christ, in fact, the resurrected Christ. The Cardinal concluded his Easter homily with an invitation to prayer, so that the resurrected Christ would give us strength to testify and instil courage, steadiness and perseverance in living and testifying the faith.

Press Office of the Zagreb Archdiocese