Feast of Blessed Alojzije Stepinac celebrated in the Cathedral 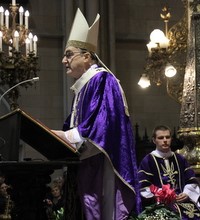 While celebrating Mass on the Feast of Blessed Alojzije Stepinac in the Zagreb cathedral on Wednesday, 10 February 2016, Josip Bozanić, the Cardinal of the Archdiocese of Zagreb, ended his homily with the following words: ‘Dear Croatian believers, dear Church and the Croatian people, your Blessed Cardinal has always been at your side, and on this 10 February we testify to stay with our Blessed Cardinal, who lives eternally as a saint in our hearts! Truly, a great saint is among us!’

'Alongside the Cardinal, Apostolic Nuncio to Croatia Msgr. Allesandro D'Errico, bishops of the Zagreb metropolitan see: the eparch of the Greek Catholic eparchy of Križevci Msgr. Nikola Kekić, the bishop of Varaždin Msgr. Josip Mrzljak, the bishop of Sisak Msgr. Vlado Košić, the bishop of Bjelovar –Križevci Msgr. Vjekoslav Huzjak; auxiliary bishops of Zagreb Msgr. Ivan Šaško and Msgr. Mijo Gorski, fathers provincials, Vice Postulator of the Cause for the Canonisation of the Blessed Alojzije Stepinac Msgr. Juraj Batelja and many Church dignitaries, over one hundred priests, friars and nuns and permanent deacons, celebrated the Holy Mass. At the beginning of the Holy, Mass the Cardinal said: ‘If you wish to see Croatian believers listening unanimously and faithfully to the Word of God, praying to God and singing, and seeking intercession of Blessed Alojzije Stepinac, it is possible to see this precisely on the tenth day of February in his Cathedral. Year after year we feel how the testimony of life and death of Blessed Alojzije Stepinac carries us in this place. It has been the same for decades...’ At the beginning of his homily, the Cardinal reminded us that it has been 56 years since Blessed Alojzije passed into eternity and 70 years from the sad trial when the Blessed Cardinal was shamefully found guilty before the Communist court, and asked the believers to open to Jesus' calling to do specific deeds in this time of Lent: charity, prayer and fast, as signs of renewed longing for God's vicinity and fruits of salvation which the Lord attained for every man.

‘Spiritual warfare is important in this time we live in, when a strong detachment from seeking God's will and disobedience to His plan is felt. We live in an era where everything you want to do and everything you can do is presented as acceptable and allowed. Ethical relativism has created a great gap and weakened the importance of choice, whilst at the same time it has strengthened the impression that one does not have to decide between good and bad, but modify them to his/her needs. With such a frame of mind, spiritual warfare and endeavours are considered as unimportant and lose their meaning.’ the Cardinal said.

When it comes to meaning of charity, prayer and fast, the Cardinal held Blessed Alojzije Stepinac up as a great example to follow and to do good, not for others, acknowledgement or reward, but in secret, out of our love for God and fellow man. ‘The Blessed Alojzije never spoke or acted in a way to be seen or to leave an impression. He lived the evangelical secrecy in a way which fully manifested itself in the authenticity of his public appearances and statements. Being close to God in secrecy bore fruits in public.

Everyone who wishes to learn more about Blessed Alojzije’s life and immerse in the treasury of his intentions, words, written materials, and especially his work, ends up surprised by the amount of his commitment which was not obvious nor available to everyone, but which was the support of everything that was visible and public in his life. Also, the secrecy of his actions did not contradict with what was known. Instead, it posed a solid support for everything that was made public.

Harmony between what remained known only to God, what his closest associates knew and what concerned his pastoral service and public appearance is an inspiration to us, so we could live our Christianity as yeast which is visible just in its manifestation and secret in its presence.’
Addressing circumstances regarding the process of canonisation of the Blessed Alojzije Stepinac, the Cardinal said they were ‘a new incentive to show the world that wonderful harmony, and to take fruits of his holiness, which were in evangelical secrecy, out to daylight. We are grateful that the Holy Father, who sees in secrecy, has already rewarded Cardinal Alojzije for his fidelity.’ The Cardinal continued: ‘We are aware that the dispute over Blessed Alojzije Stepinac has become a matter of politics. It is obvious that the objections come down to his stand on advocating the right of the Croatian people for their own country and statements connected with his joy that Croatia could be able to create its national work on Christian principles and true values, which is seen as sin by his opponents.

Citing words of Blessed Alojzije Stepinac from his circular letter to the clergy of the Archdiocese of Zagreb on the occasion of the establishment of the State of Croatia and Alojzije’s words from his sermon in the basilica of the Sacred Heart of Jesus in Zagreb on 27 March 1938, when the Blessed Stepinac condemned every form of racism, Cardinal Bozanić said: ‘Blessed Alojzije Stepinac valiantly and fearlessly spoke of evil no matter where it came from. Due to this he was disliked by all governments of his time in the area. His words were prophetic during the war, just like he warned people against the ideologies of Communism and Nazism and injustices of the systems of government which had no respect for God or man.’

In the final chapter of his homily, the Cardinal reflected on the speech one can frequently hear in the Croatian public which concerns the need of confrontation with the past: ‘We know, there are those who wish to darken our freedom and national pride by making us go back in the past and bending the truth about it. By asking us to ‘confront our own history’, they actually want to say that our history speaks against us.

There are those fleeing from the truth of history and their own past say we have to take ‘a turn towards the future.’ They want to hide the truth, deny the injustice, keep their own past secret because today they present themselves as ostensible peacemakers and righteous people trying to build some new cosmopolitanism, without relying on history.’ Both of them have the same obvious aim: ‘Namely, the future cannot be built on oblivion, just like there is no hope where there is no memory without gratitude and willingness for forgiveness. Boldness and clarity of looking in the future relies on the strength of memory in which, without harming the truth, we carry our virtues and our faults, our victories and our defeats. Blessed Alojzije Stepinac teaches us how to responsibly and truthfully treat our own history. The truth cannot stand exaggeration or rejection of historical facts, cannot stand myth and does not allow bending of the truth for the purpose of pursuing some new goals.

For that reason Blessed Alojzije Stepinac is a landmark of our confrontation with history and a joyful hope of our future. In order to truly confront the past, let Blessed Alojzije be an incentive to compare his life, service and deeds to those of his contemporaries in responsible positions in Churches and societies in other countries and other regions. We are certain that these comparisons with similar circumstances will make the figure of Blessed Alojzije Stepinac shine even more.

The Cardinal ended his homily with an invitation to the believers: ‘This is a time of mercy, as we are invited to faithfully accept every trial as a gift of a more powerful manifestation of God’s love. Brothers and sisters, let us continue living in prayer and good deeds because in this way we testify how much we care for Blessed Alojzije.

Let us continue living our love for the Croatian homeland the way Blessed Alojzije wanted Croatia to progress, to be God’s land, to keep His commandments and to rely on his mercy to do well. Let the Blessed Virgin Mary, Mother of God and St. Joseph, the patron saint of Croatia keep vigil of our homeland.’

In the end, the Cardinal thanked the believers for participating in the Prayer walk with the relics of Stepinac through the parishes of Archdiocese of Zagreb which ended today in Krašić and invited everyone: ‘Brothers and sisters, none of us should forget the calling God entrusted to us in our families, the Church and our homeland. Let us do best to contribute to prosperity of Croatia and the Croatian society. Let us not be discouraged by oppositions and difficulties. Let us especially pray for the unity we desire so much, mutual respect and cooperation of all inhabitants of our country.

'Dear Croatian believers, dear Church and the Croatian people, your Blessed Cardinal has always been at your side, and on this 10 February we testify to stay with our Blessed Cardinal, who lives eternally as a saint in our hearts! Truly, a great saint is among us!'

The Press Office of the Archdiocese of Zagreb