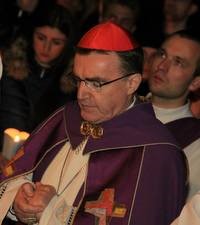 Light of a thousand candles enlightened Ksaver calvary on Friday, March 27, where Archbishop of Zagreb Josip Cardinal Bozanić led the traditional way of the cross for youth. Besides candles, the Ksaver calvary was enlightened also by the bright figure of blessed Alojzije Stepinac, who himself passed his way of the cross led by the trust in Him whom he devotedly followed.

Beginning with the false accusations, a thousand young people reflected over freedom that no verdict can harm – a peaceful conscience. Accepting the cross and, with it, an unfair sentence, they contemplated human weaknesses and failures, fears and infirmities, concluding however that power is made perfect in weakness (2 Cor 12,9). In Jesus' encounters on the way of the cross, they met consolation and kindness, compasion and hope; and in bright figure of Christ that shone on Veronica's scarf, the young people reminded how when they find strength to separate from the crowd, they also can be reflection of Christ's face in the world. Young people were encouraged by the faith that God's justice  is attainable and that the deceptive power of death receded into new life.

At the end of the devotion, young people were additionally encouraged by their Archbishop. He reminded them that they didn’t walk alone through Ksaver calvary. “Jesus is present here”, said Cardinal explaining the youth how the way of the cross devotion is a school that teaches us about wisdom and logic of the cross, the logic that is different from the logic of the world. He reminded them that the power of our faith lies in the presence of Jesus. “Jesus tells us tonight: Be yourself! And do you know when person is most himself? When he is godly!  Be completely yourself; be godly!”, wished Cardinal to the youth on the way of the cross devotion on Zagreb’s Ksaver.


Through donations that were collected by selling candles, which were donated by the shrine Saint Mary of Marija Bistrica, young people collected 3.460,15 HRK and 1.57 € for Fond „Youth for youth“.