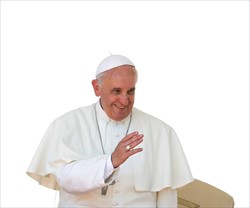 The first pope from the American continent, Jose Mario Bergoglio, is from Argentina. The 76-year-old Jesuit, the Archbishop of Buenos Aires, is known for his strong personality across the continent but also as a simple priest loved by his diocese, which he travelled through by public transport during his 15-year-long bishoprics.

‘My people are poor and I am one of them’, said Bergoglio more than once, thus explaining his decision to live in an apartment and cooking his own dinner. He has always advised and encouraged his priests to show and exert charity and apostolic courage, pointing out that their door should always be opened to everyone. On several occasions he said that the worst thing that could happen to the Church is to become, as de Lubac (a French Jesuit) once said ‘spiritually secular’, meaning that the Church cannot be closed in itself.

He was born on December 17, in 1936, in Buenos Aires, as the son of Italian immigrants. His father Mario worked as an accountant for the railroad and his mother Regina Sivori was a housewife who dedicated her life to five children. After graduating in chemical technology, Bergoglio chose the priesthood and entered the seminary. In the novitiate of the Society of Jesus he entered on March 11, 1958. He finished humanistic studies in Chile, and upon his return to Buenos Aires in 1963, he graduated in philosophy at the San Jose College of Philosophical and Theological Faculty of San Miguel.

For the next two years he was teaching Literature and Psychology at the Immaculate Conception Faculty in Santa Fe. In 1966, he was teaching the same subjects at the Colegio del Salvatore in Buenos Aires. Between 1967 and 1970 he was studying theology at the San Jose Faculty of Theology in San Miguel.

Archbishop Ramon José Castellano ordained him to the priesthood on December 13, 1969. From 1970 to 1971, in the Society of Jesus, he spent his third proband at the University of Alcali de Henares in Spain.  On April 22, 1973, he laid his perpetual profession of vows. He was a master of novices in Villa Barilari in San Miguel (1972 - 1973), a professor at the Faculty of Theology, a consultor to his Province and the rector of the College. He was elected Provincial of Argentina on July 31, 1973, for a term of 6 years. Between 1980 and 1986, he was a rector of the College and Philosophical and Theological Faculty of San Miguel, but he was also a parish priest in the San Miguel diocese.

In March 1986, he went to Germany to complete his work on his doctoral thesis. After that his superiors assigned him to the Salvatore College and then reassigned him to the church of the Society of Jesus in Cordoba, where he served as a spiritual guide and a confessor.

The Blessed John Paul II appointed him Auxiliary Bishop of Buenos Aires on May 20, 1992, and on June 27 of the same year he was ordained as bishop by Cardinal Antonio Quarracino. His co-consecrators at the ceremony were Apostolic Nuncio Ubaldo Calabresi and bishop Mercedes – Lujana Emilio Ognjenović. On June 3, 1997 he was appointed the Archbishop Coadjutor of Buenos Aires. After Cardinal Qarrancin’s death in February, 1998, Bergoglio became the Archbishop of Buenos Aires. As Archbishop he travelled by public transportation and instead of living in the bishop palace, he lived in a rented apartment, so he was nicknamed as ‘the cardinal of the poor’. He speaks Spanish and Italian fluently and German well. He is known as a good cook, an opera lover and a friend of the Greek classics, Shakespeare and Dostoyevsky. Also, he is said to be a good swimmer despite having difficulties with lungs since childhood.

He wrote several books: Meditationes para religiosos (Meditations for the Religious) in 1982, Reflexiones sobre la vida apostolica (Reflections on the apostolic life) in 1986 and Reflexiones de esperanza (Reflections of Hope) in 1992. He was Ordinary for the Faithful of the Eastern Rite who live in Argentina but do not have their own Ordinary. On top of that, he was the Great Chancellor of the Pontifical Catholic University of Argentina.

At the 10th Ordinary General Assembly of the Synod of Bishops in October, 2001, he was Relator General and for the period between November 2005 and November 2011 he was president of the Argentine Episcopal Conference.

The Blessed John Paul II created him cardinal at the Consistory of February 21, 2001 and St. Robert Bellarmina's church was assigned to him as his titular church. He was a member of the Commission for Latin America, Pontifical Council for the Family, The Congregation for Divine Worship and the Discipline of the Sacraments and Congregation for Institutes of Consecrated Life.